Skip to content
You are here
Home > Food > Here’s A Mouth Watering Guide To Kashmiri Wazwan That Will Make You Crave For It.

Wazwan is a multi-course meal in Kashmiri cuisine, usually served in a Trammi or traem. Mostly served during weddings, the very name is enough to bring aroma of your home town when you are outside the valley. Just say the word “Wazwan” in any Kashmiri home and there is not a single person who would not say “Aab ounthe mei, bathe taraem wathiha” (You made my mouth water wish someone could send me a Taraem).

2. Between fifteen and thirty preparations of meat are cooked overnight under the supervision of vaste waza (master chef). 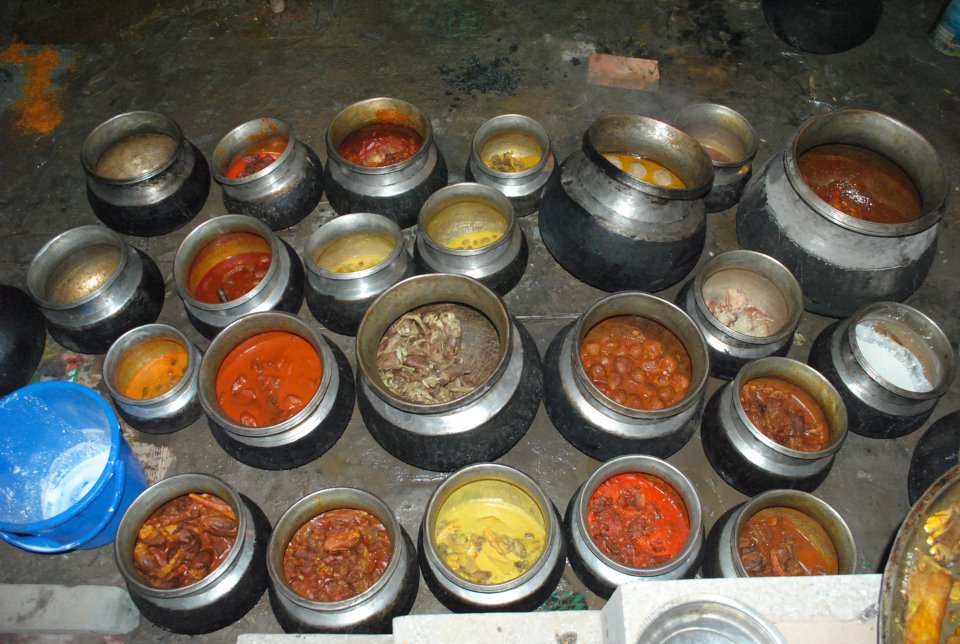 3. The red colour in kashmiri cuisine is usually derived from either the Kashmiri chillies or cockscomb flower called mawal. Kashmiri Cuisine use lots of dry fruit .

4. It is in fact the availability of Waza that determines the marriage schedule in Kashmir.

5. Wazwan is not a simple meal. It’s a ceremony. Guests are seated in a group of 4 on a dastarkhwan or sheet, usually white in color and share the meal in a Traem.

6. It begins with washing of hands in a basin called the Tasht-è-naer or Tash Naer, which are taken around by attendants- either the waza or the close relatives join him in serving. 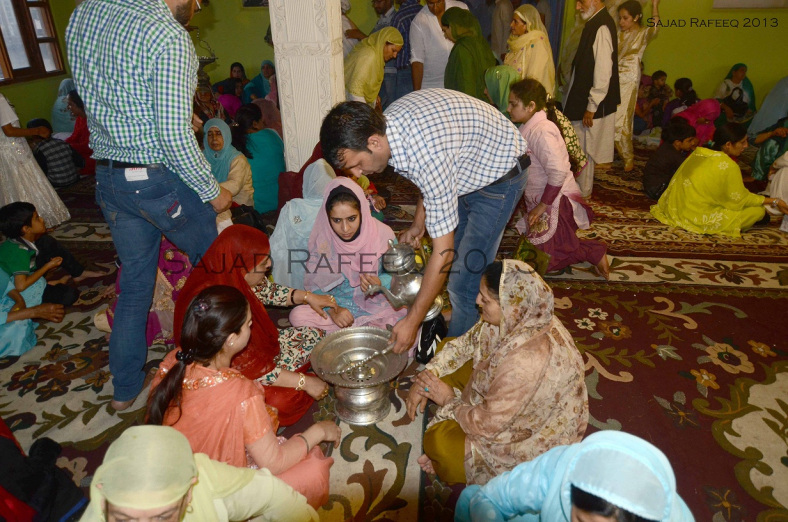 People wash hands in an arrangement called as “TASH NAER “

7. Tash is a copper vessel filled with water and naer, in which guests wash their hands.

9. Anyway, as this tash-t-nari is taken away, a ceremonious entry by attendants is made bearing Tramis/Traem. 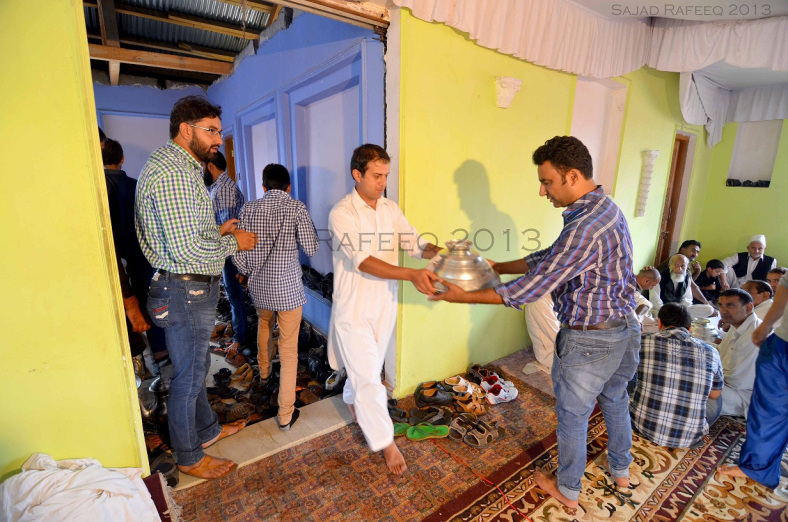 10. Trammi or traem is a large and beautifully engraved copper platter. Trammi is covered with sarposh (sought of lid, that keeps food warm).

Disclaimer: The following images maybe disturbing to some viewers. Viewer discretion is advised. Read at your own risk .

11. When the lid of trammi is removed, there is an aroma of different dishes that makes your stomach churn. A big paper tissue covers the entire ingredients of traem/trammi before you could finally catch glimpse of mouth watering wazwan.

Also Read:   7 Amazing Cafes You Must Definitely Visit In Kashmir 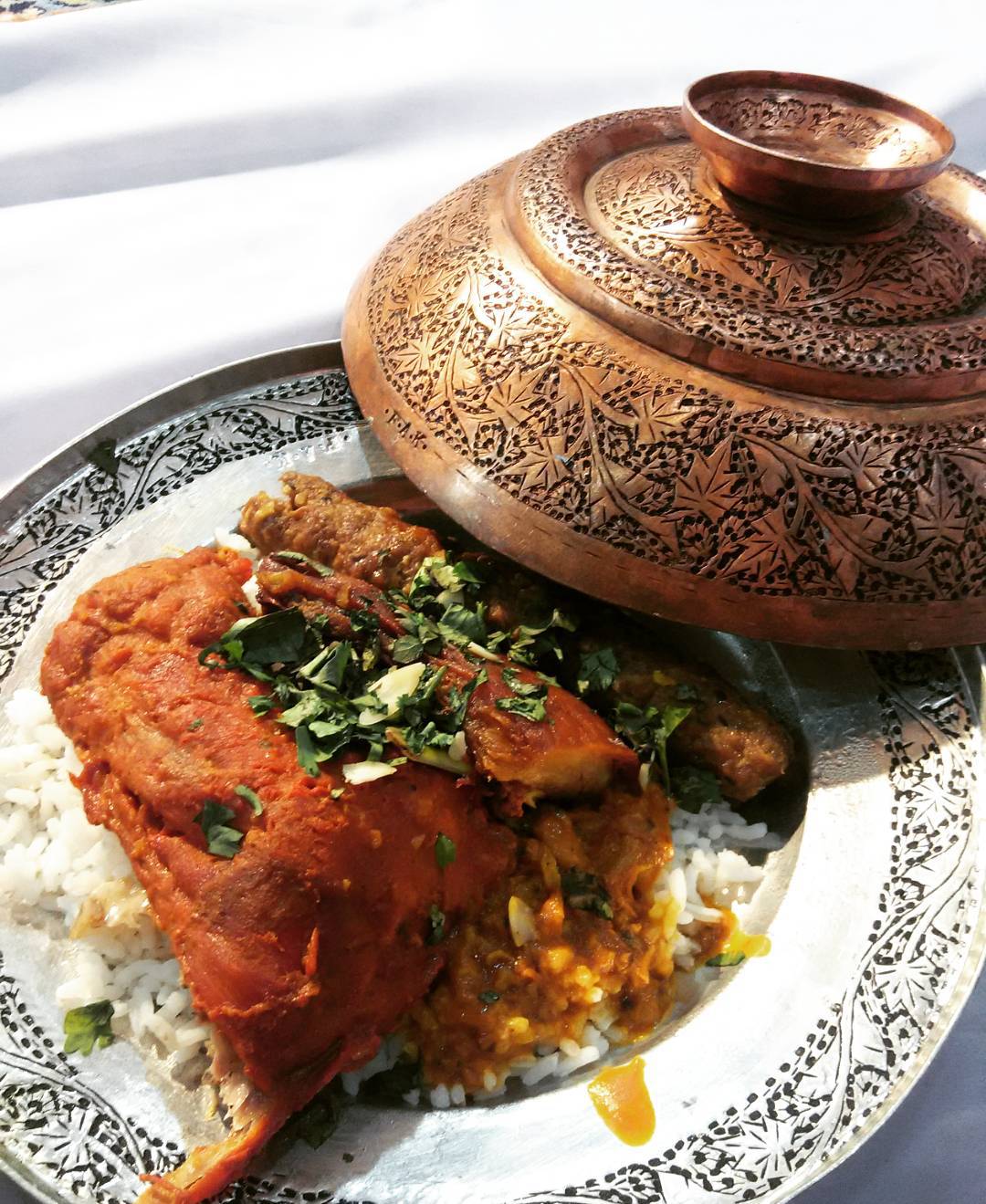 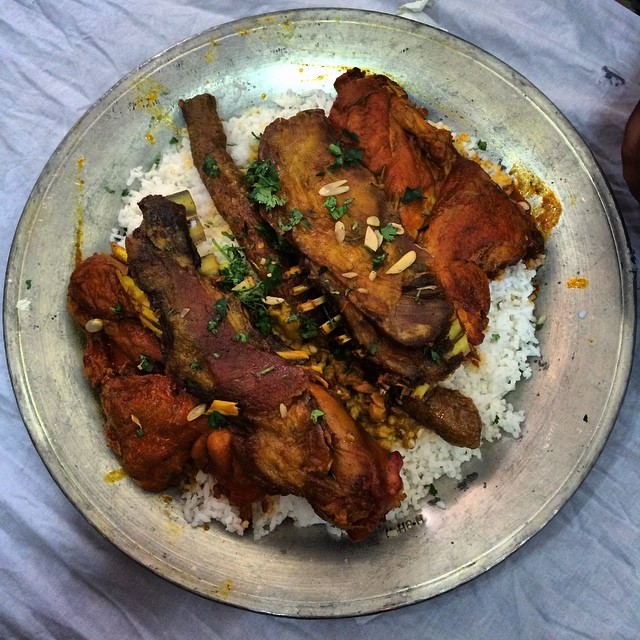 13.  And consists of a heap of rice and the first few courses which include:-

A) Seekh kabab’s . Trammi is quartered by 2 long Seekh Kababs. They are cut in halves when served. Seekh Kababs are minced meat roasted on skewers over hot coal. Someone preferably eldest in tarami divides kabab equally among four. 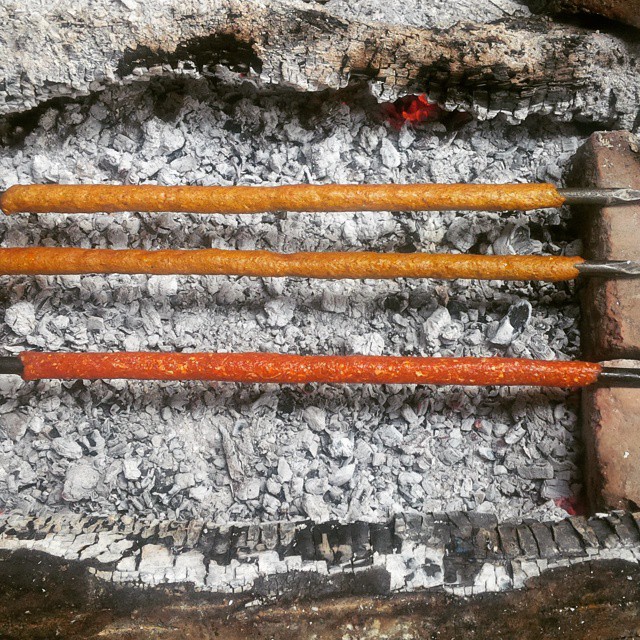 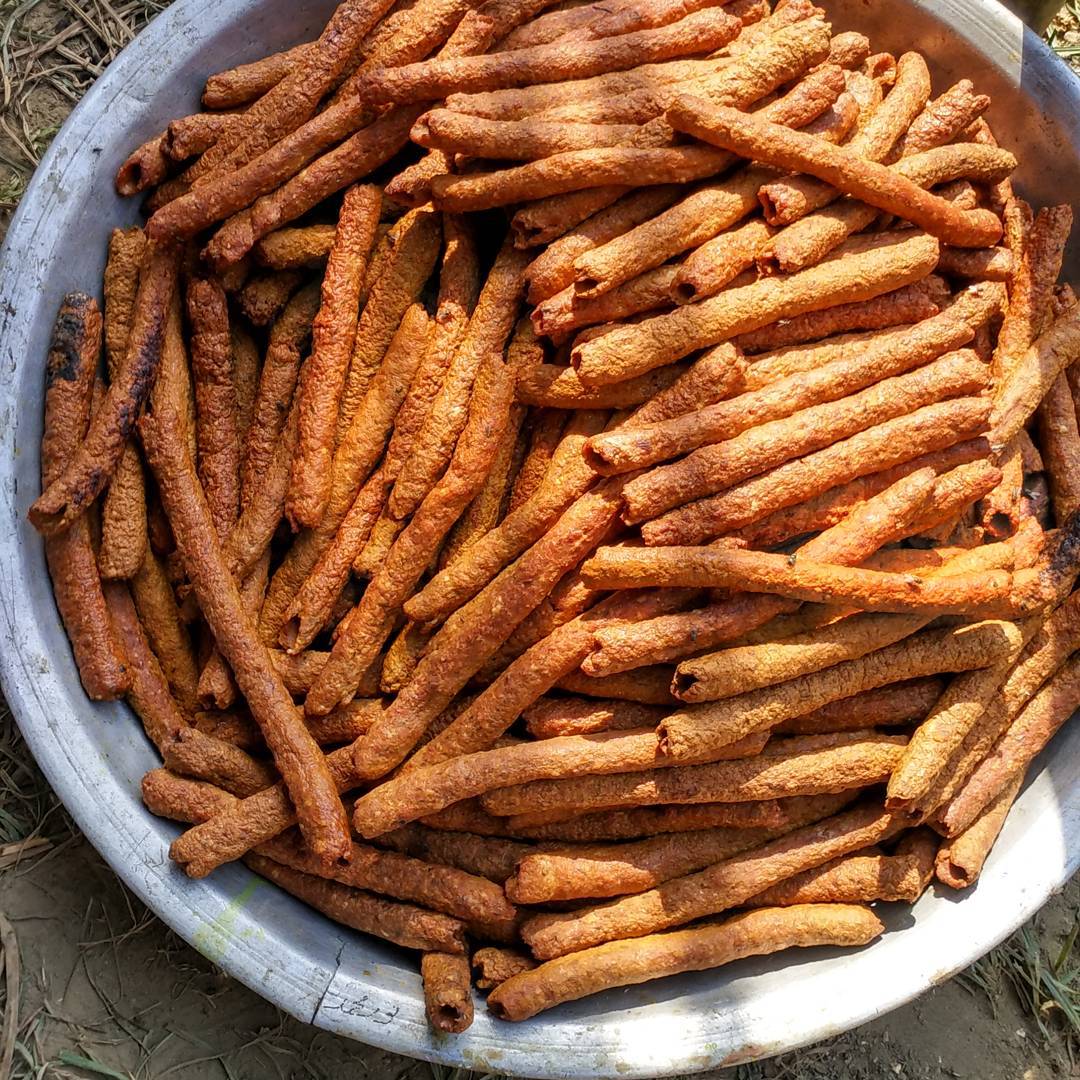 B) Tabak- maaz : Tabakh Maaz is a glossy meat made of lamb ribs that are cooked twice and then simmered in yogurt with spices till tender. It’s then fried thoroughly and served in dry form. 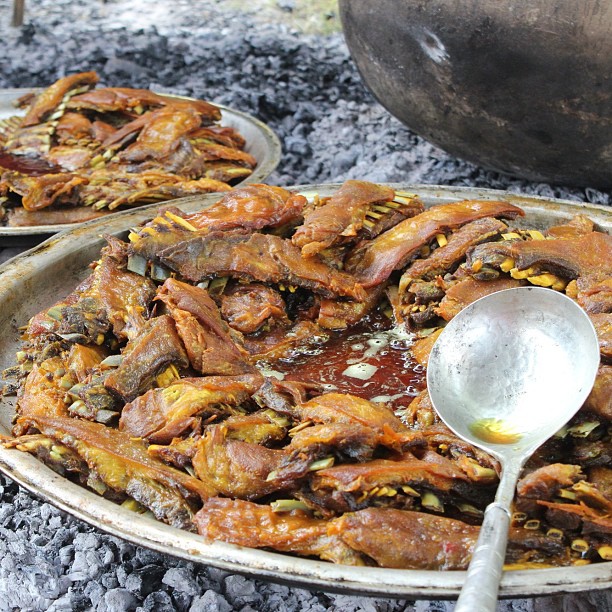 E) Kashmiri Methi : Underneath all these dishes, lies Methi.  It is a sort of stew usually made with lamb stomach and flavored with methi or fenugreek leaves. Don’t be a baby. It’s really good. There are 4 small divisions of methi .

13. What follows then are a number of dishes that are served by wazas .

A) Rista: Rista is a red colored Kashmiri Kofta  or meatballs in  red gravy. Four ristas are served to each Trammi . 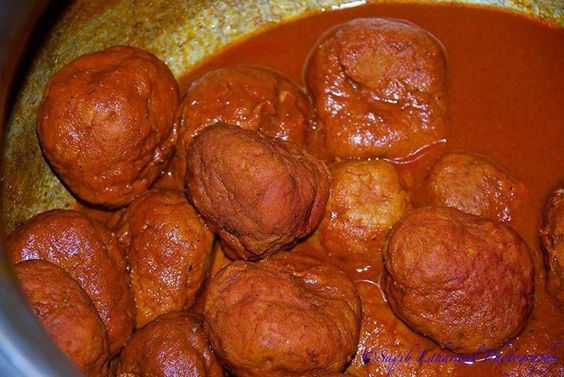 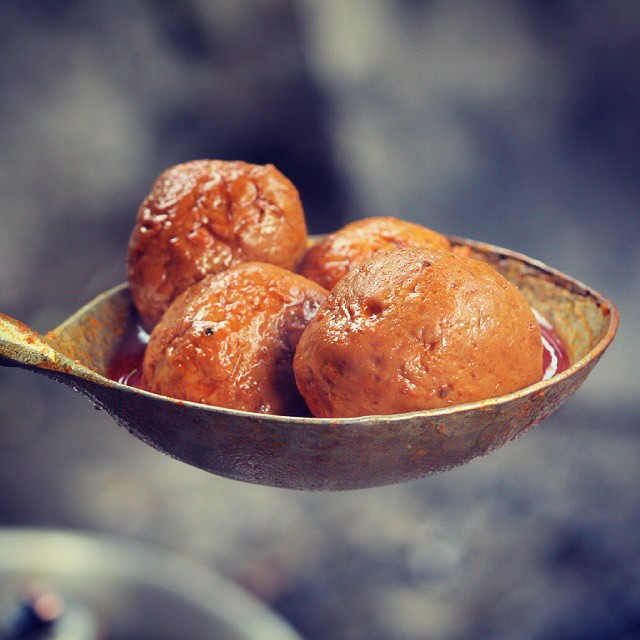 B) Roganjosh  or Red lamb: Rogan, means “oil or fat”  and Josh   means “intense heat”. Thus, Rogan Josh means made in oil at intense heat. This is a meat dish in which tender lamb is cooked with kashmiri spices. There are no tomatoes added to this traditional dish; not even to enhance color. The colour comes from mawal or cockscomb.

C) Daniwal Korma . The word ‘dhaniwal’ refers to coriander in the local Kashmiri language. Dhaniwal Korma is mutton korma cooked in a lot of coriander or dhaniya and yogurt based gravy .

Also Read:   5 Best Restaurants With an Amazing View In Srinagar 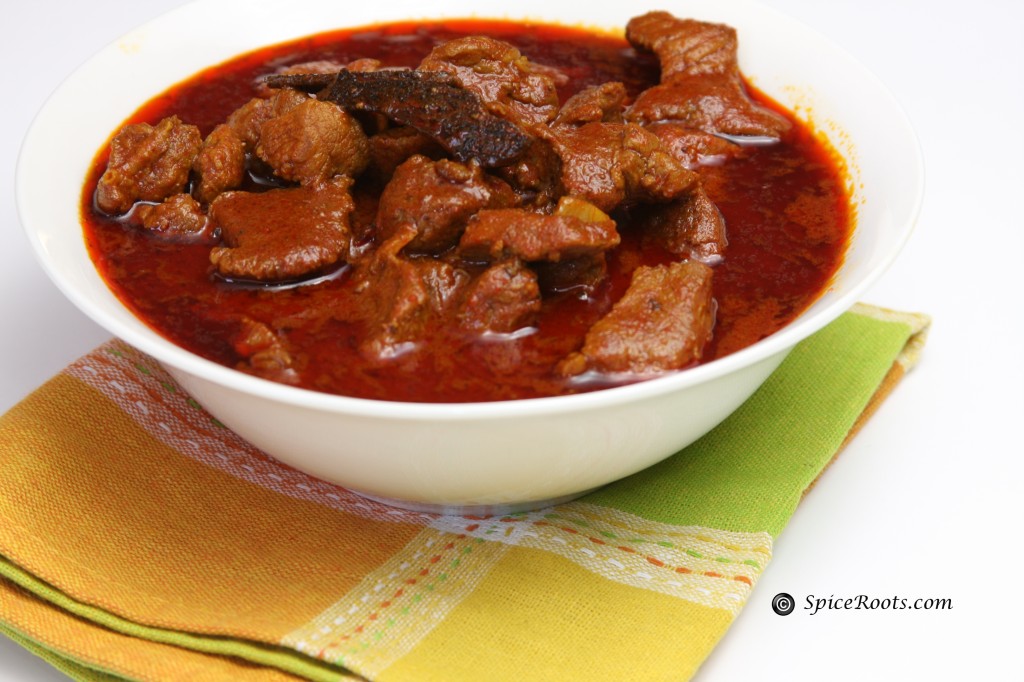 E) Lahabi Kabab or Moachi Kabab: Lahabi kabab is a diamond shaped kabab which is flattened and pounded meat cooked with spices, yogurt and coriander.

F) Aab Gosh : Aab gosht is sheep ribs cooked in a milk based gravy and flavoured with green cardamoms and saffron. This is a mild dish with tender and juicy meat cooked in milk without any hot spices. 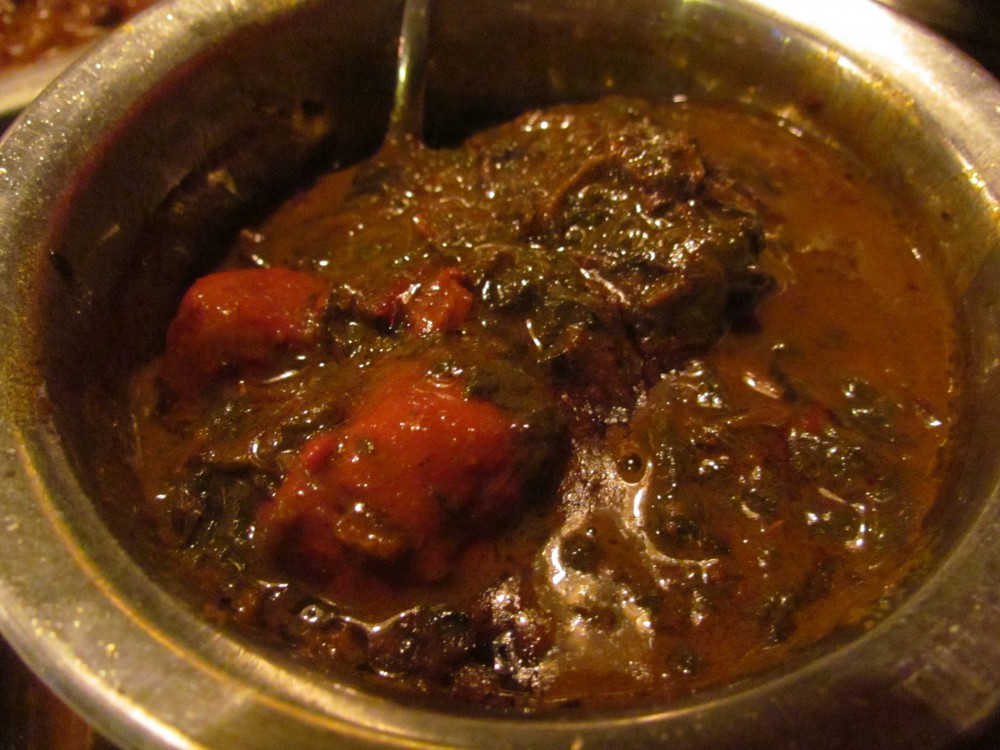 H) Ruwangan Chhaman  or Tomato paneer or Waza chamman: Paneer(Cheese) is called Chhaman in Kashmiri. Paneer is simmered in tomato sauce, flavoured with spices and fennel seeds (cheese with Tomato gravy). Each tarami has one piece served by waza which is then equally distributed. 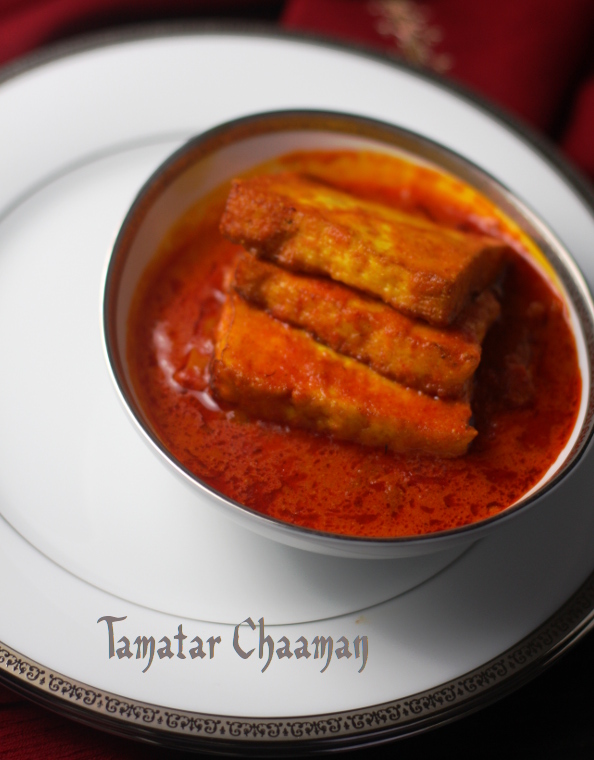 J) Yakh’n or Yakhni: Yakhni is a popular mouth watering Kashmir dish. It is a yogurt based curry and is either made with lamb or lotus stems. It is prepared in curd along with spices and does not have turmeric or red chilli powder. Bay leaves, cloves, cardamoms and fennel seeds lend primary flavours to this curry. The difference between yakhni and Aab gosht is that Aab Gosht is made with milk instead of yogurt.

K) Ghustaba: It is the finishing dish served in Wazwan. Before serving gushtaba, guests usually prefer to have fresh rice so that they can relish it with sumptuous gravy without mixing with flavours of other dishes. Gushtaba is a dish of minced velvety textured mutton balls cooked in curd and spices. It is similar to Rista, but cooked in aromatic yogurt based gravy (Yakhni) and larger in size. Traditionally, gushtaba is made with minced mutton and the lamb fat together. The mutton is hand-pounded, using a wooden hammer on a stone or wooden block. 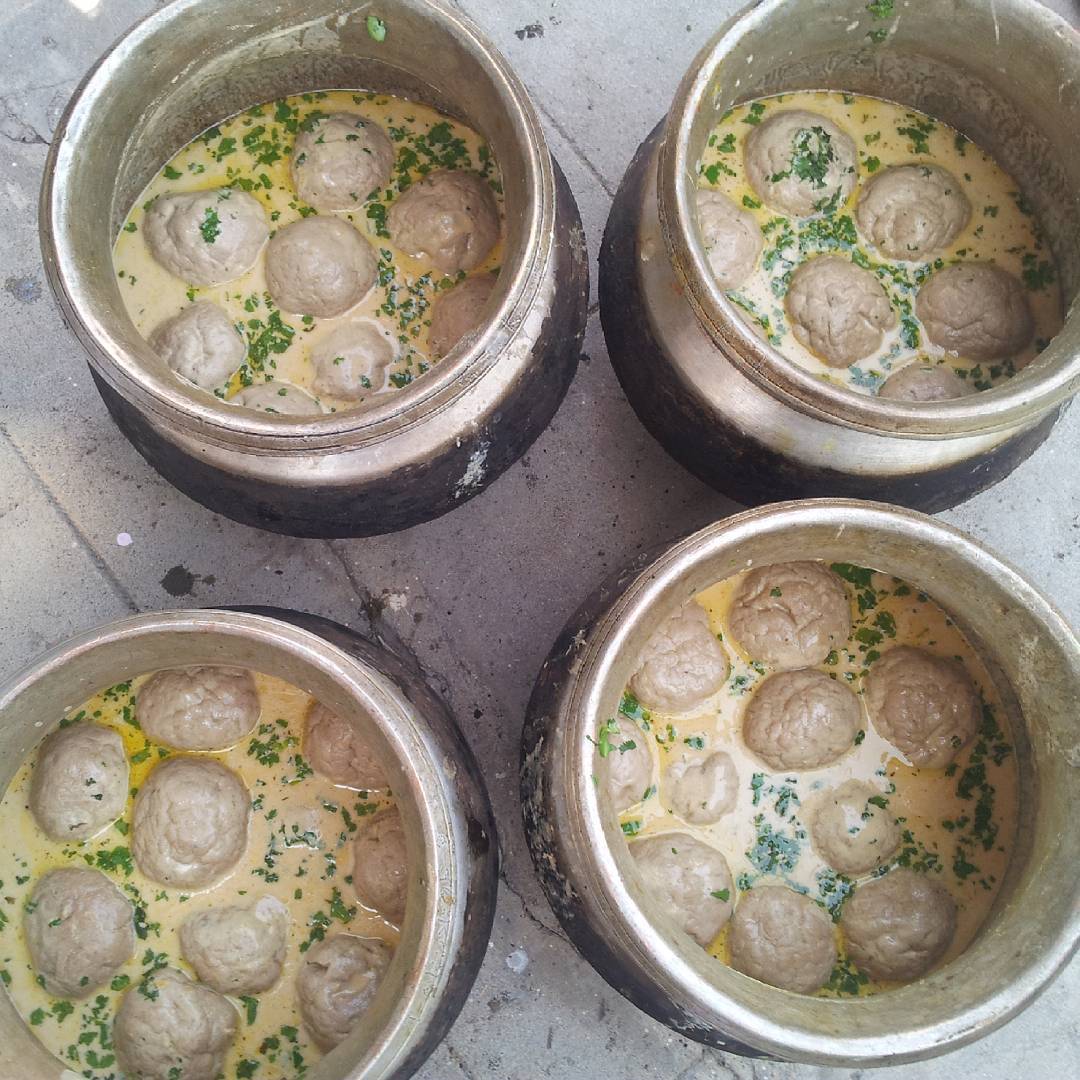 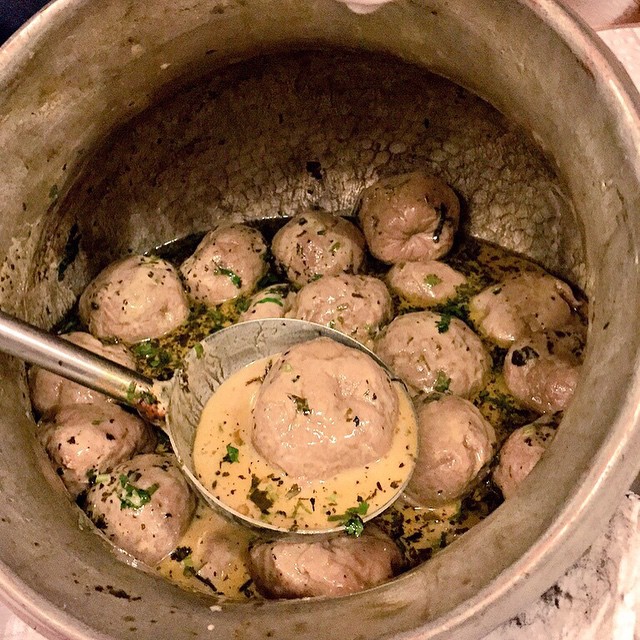 In addition to above there are other dishes as well:

Haak: Letuce is popularly known as Haak in Kashmiri. It is the most popular vegetarian dish. Haak leaves are green in colour and look a lot like spinach. BUT THEY ARE NOT SPINACH. It is cooked in mustard oil and kashmiri chillies. There are varieties of it: monjji haak and wastè haak. Hakh is usually served on Mehndi Raat in weddings.

Also Read:   Here's How to Get Kashmiri Apples Delivered to Your Doorstep During Lockdown 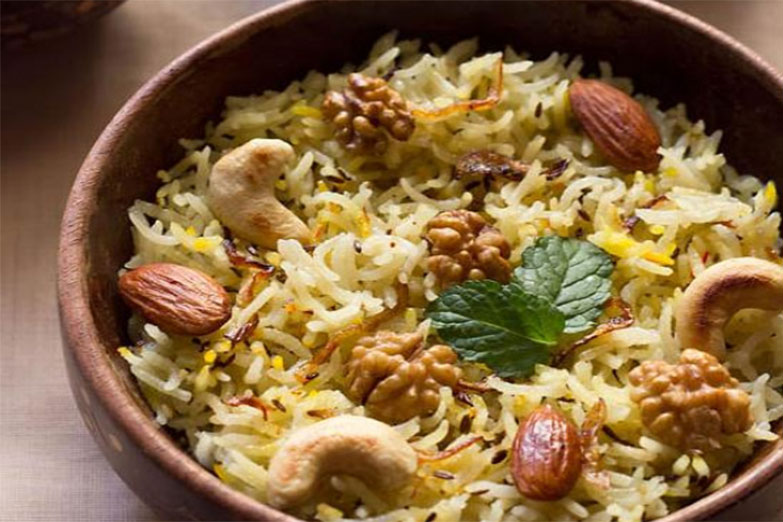 Curd is usually served in an earthern pot. Salad, pickle and chutney are either served separately in small pots or in 1 plate.

The various chutneys in Wazwaan are:

A) Doon Chetin or Walnut chutney  or akhroot Ki chutney: Doon is walnut in kashmiri . This chutney is made with walnuts, yogurt and chillies. Walnuts are found in abundance in Kashmir and no home kitchen is found without them.

b) Gande chetin or Onion chutney:  It is made with sliced onions which are soaked in vinegar and flavoured with dried mint leaves and red chilli powder. This chutney is very spicy .

C) Mesheid Al Chutney  Or pumpkin chutney  or Dodh Al ( Bottle Gourd in Yoghurt): Dodh Al is made with very simple ingredients such as Pumpkin, dates, cardamoms, dry nuts and dash of honey. This chutney brings a slight sweetness to the table of spicy food. 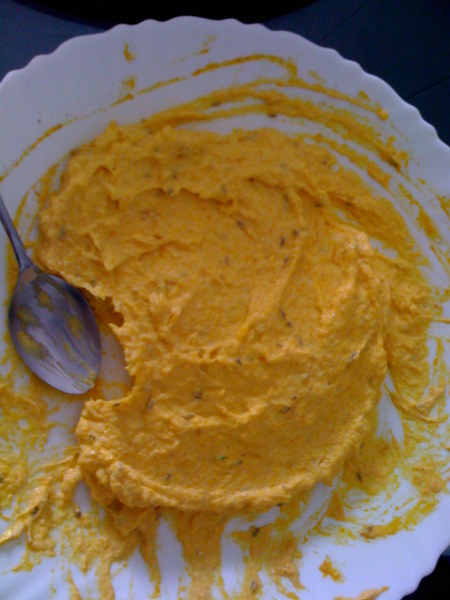 D) Muji Chetin: Muji Chatin or Radish chutney or mooli ki chutney is made with radish and yoghurt . This chutney goes best with piping hot Kashmiri food. Radishes are very good for health and have a cooling effect on stomach

Wazwan ends with firni: Firni  or Phirni is cool creamy delicious dessert made of sooji and milk, garnished with dry fruits. 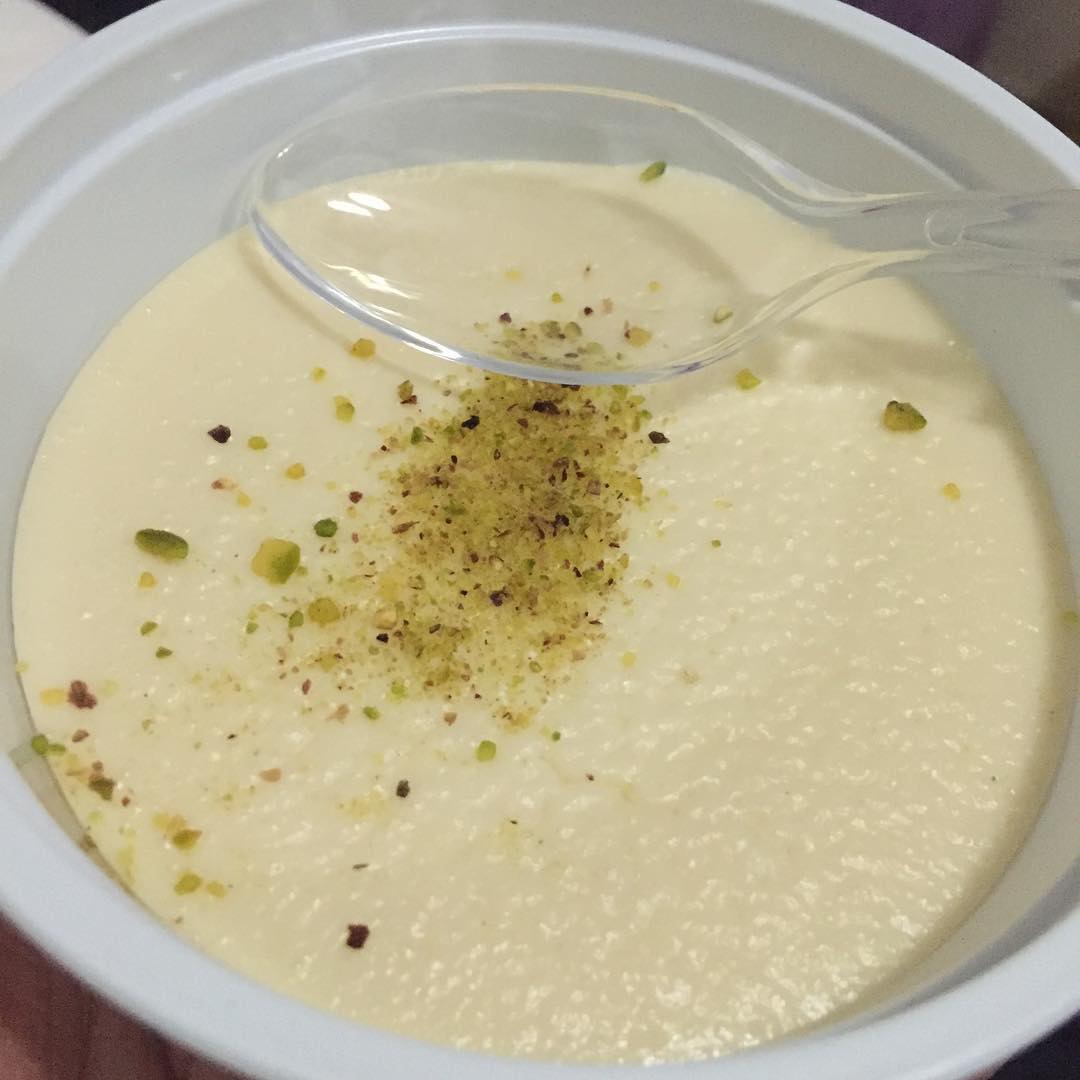 Wazwan is like an art. Wazwan has become a yardstick for measuring one’s ability to cook. Any dish that turns out to be tasty is often compared to wazwan.

Read More: Find out how to make Kashmiri breads such as roti, kulcha, etc. at home.

If you haven’t had wazwan, I suggest you to go for it ’cause you’re missing out on a reeeeaaaaaally delicious package. And, if you are a Kashmiri, well, SORRY for playing with your taste glands 😉

13 thoughts on “Here’s A Mouth Watering Guide To Kashmiri Wazwan That Will Make You Crave For It.”

3 Places to Order Sweets Online in Kashmir for Eid 2021

3 Places to Order Sweets Online in Kashmir for Eid 2021

13 Things That Happen On Bakra Eid In Kashmir

7 Best Things That You Must Definitely Do Near Dal Lake

3 Beautiful Lakes You Must Visit in Kashmir